The National Asset Management Agency (NAMA) is a controversial body created by the Irish Government to acquire property development loans from Irish banks in return for government bonds, primarily with a view to improving the availability of credit in the Irish economy. To date it has spent €47 billion and was controversial and divisive from the beginning. NAMAland sought to visualise this one aspect of the Irish financial collapse by overlaying an augmented layer of data on NAMA properties over the physical space of Dublin. This serves to make concrete what has become an abstract account of billions in loans by associating it with real buildings and lands which can be interrogated in real space on any smartphone.

NAMAland Walks
The project has also included a series of very successful guided walks through NAMAland such as the 'NAMArama' walk with Market Studios and 'In These Troubled Times' with Rua Red which address the issues at the heart of the financial collapse and NAMA. I have also spoken on the project and the role of augmented reality technology as an activist tool of political critique in a variety of forums.

Press
NAMAland has received a lot of attention in the media including a segment on RTE1 New at Nine, more information is available on the NAMAland News page. NAMAland has also popularised the term 'NAMAland' which has entered into general usage when discussing the Irish property bubble. 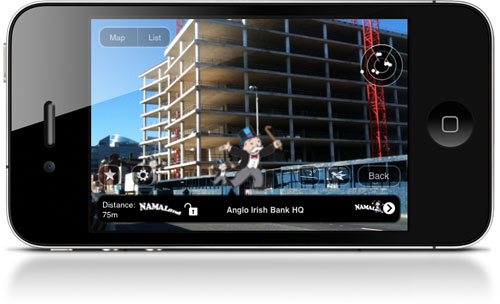 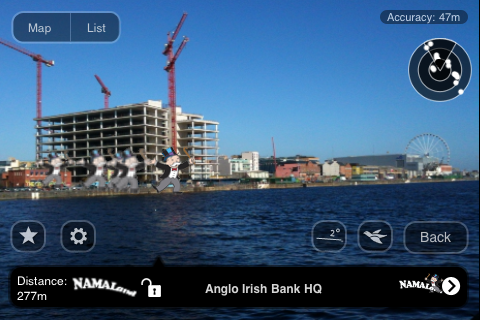 Gallery of Images of NAMAland walks